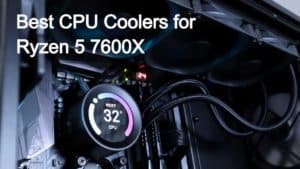 With the launch of the new AMD Ryzen 7000 series processors based on the Zen 4 architecture, AMD introduced a new 5nm manufacturing process. This lead to better efficiency and performance. To match the higher clock speed Intel counterparts, AMD increased the TDP on the Ryzen 5 7600X to 105W. With higher TDP and a completely new motherboard chipset, better CPU coolers are essential to maintain performance.

This article will describe some of the best-performing CPU coolers for Ryzen 5 7600X. AMD has mentioned that previous coolers built for AM4 sockets will be compatible will newer AM5 socket motherboards. Since the Ryzen 5 7600X is targeted for gaming, the CPU will run at peak performance for prolonged periods. Any drop in performance due to thermal throttling will result in varying framerate and lag while gaming. Hence a CPU cooler is essential to keep the CPU temperature low even at peak performance.

The Ryzen 5 5600X comes with 6 cores and 12 threads. It has a base clock speed of 4.7GHz and a boost clock speed of 5.3GHz. In this article, we will compare air coolers and liquid coolers and measure CPU temperatures at peak performance for prolonged periods to recommend a clear winner.

The Noctua NH-U12S Redus Air Cooler is a high-performance cooler at an attractive price. It comes fitted with an NH-U12S heatsink which is one of the best out there and is even used in more premium Noctua coolers.

We have compared both the NH-U12S Redus and Cooler Master Hyper 212 air coolers for design, RGB lighting, performance, and noise to pick the best CPU cooler for Ryzen 5 7600X.

For design, the Noctua NH-U12S Redux features a silver heatsink and a standard 120mm grey Noctua fan. With a height of 158mm it should fit into any ATX and Micro-ATX motherboards and PC cases easily.

The Noctua NH-U12S Redux has a superior heatsink paired with the NF-P12 120mm fan with PWM. The NF-P12 fan is a very popular high-performance fan that features PWM for automatic speed control with a maximum of 1700rpm. The heatsink fins are made from aluminum while the base and heat pipes are made from nickel-plated copper. It also comes pre-applied with a premium NT-H1 thermal compound.

The Cooler Master Hyper 212 Black Edition on the other hand has a nickel-plated heatsink paired with a 120mm fan. The 120mm fan comes with PWM for automatic speed control and a max 1200rpm. The 4 heat pipes are in direct contact with the base resulting in excellent heat dissipation.

The Noctua NH-U12S Redux comes with four anti-vibration pads which result in lower noise decibels. This paired with the already silent NF-P12 120mm fan at peak RPM runs at 25.1dB which is much lower than Cooler Master Hyper 212 Black Edition’s 30dB.

Be quiet! BK030 Pure Rock Slim 2 Air Cooler is relatively compact due to its 92mm fan. The three heat pipes are 6mm thick with aluminum caps. This help in better movement of heat resulting in good cooling performance.

The Pure Wings 2 92mm PWM fan paired with the heatsink does a pretty good job of dissipating heat. The be quiet! BK030 Pure Rock Slim 2 air coolers can cool processors of up to 130W TDP with great efficiency. The cooler manages to be fairly silent reaching a max of 25.4dB.

The Noctua NH-L9a Air Cooler features a premium compact heatsink that is only 37mm in height. The heatsink is made out of nickel copper similar to other premium Noctua coolers. This paired with the NF-A9x14 slim 92mm fan provides outstanding cooling for its size.

The NF-A9x14 slim 92mm fan supports PWM. It comes with an NA-RC7 Low-Noise Adaptor which keeps the fan super silent at idle. With a max noise of 23.6dB, the Noctua NH-L9a Air Cooler is amongst the best low-profile silent CPU coolers for Ryzen 5 7600X.

The Thermalright AXP-90 X36 Air Cooler features a slim heatsink that is 36mm in height. The heatsink consists of a nickel-plated copper base with four heat pipes. The fins are soldered to the heatpipe and base which results in improved performance. This is paired to a 90mm quiet Thermalright fan having a max speed of 1500RPM.

The increased 105W TDP of the Ryzen 5 7600X helped AMD higher its base clock speed to 4.7GHz and boost clock speed to 5.3GHz. With support for overclocking cooling such a power-hungry processor is not easy. For prolonged periods of gaming, a liquid cooler is the best bet to cool the CPU with little to no performance drop due to throttling. Our top pick for the best 240mm AIO liquid cooler for Ryzen 5 7600X is the NZXT Kraken X53 240mm AIO RGB Liquid Cooler.

The NZXT Kraken X53 240mm AIO RGB Liquid Cooler design is simple and minimalist. The base cap now features a rotating infinity mirror-like RGB ring and an adjustable head. The base head is low profile and compact.

The NZXT Kraken X53 uses the Aer P radiator fans which provide outstanding performance. The radiator includes a mesh to keep dust out. The radiator is paired with two Aer-P 120mm fans. These Aer-P fans feature fluid dynamic bearing and a chamfered intake keeping the noise as low as 21dB under high workloads. The speed of the Aer-P fans varies from 500RPM to a max speed of 2000RPM. Detailed performance comparison of AIO liquid coolers and CPU air coolers is in our Best CPU Coolers for Ryzen 9 7950X article.

Many gaming enthusiasts looking for a high-performance CPU air cooler want it to be silent even at peak workloads. Our pick for the best silent CPU cooler for Ryzen 5 7600X is the be quiet! Pure Rock 2 Air Cooler.

In our Best CPU Cooler for Ryzen 9 7900X article, we have compared the be quiet! Pure Rock 2 Air Cooler against the Noctua NH-U12S Redux Air Cooler to recommend the best performing silent CPU air cooler.