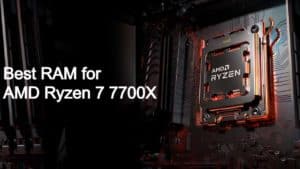 The new DDR5 RAM is almost two times faster than DDR4 RAM kits resulting in better gaming. With the new AMD Ryzen 7000 series processors supporting only DDR5 RAM compatible only with newer AM5 motherboards, this is the perfect time for an upgrade.  In this article, we will compare the best-selling DDR5 RAM kits and recommend the best RAM for Ryzen 7 7700X.

We recently published an article where we compared some popular RAM kits and picked a great performing, affordable/budget-friendly RAM for the Ryzen 5 7600X. In this article, we’ll focus on comparing high-performance RAM pairing it with the Ryzen 7 7700X.

Our Recommended RAM for Ryzen 7 7700X

The Ryzen 7 7700X is a popular pick among gamers because it’s an 8-core processor with a high single-core clock speed perfect for running any game. The CORSAIR Vengeance DDR5 RAM is our recommended RAM for Ryzen 7 7700X.

The CORSAIR Vengeance DDR5 RAM comes in a low-profile design. Its outer covering is made out of aluminum and is designed to also act as a heatspreader to remove heat from the PCB.

The Kingston Fury Beast also has a low profile design with its outer metal covering doubling up as a heatspreader.

Both of these RAM kits do a decent job in cooling the internal PCB. Having a good PC case with great airflow will help.

The Corsair Vengeance comes included with iCUE software which enables a bunch of useful features such as real-time frequency monitoring, onboard voltage regulation for overclocking, and the ability to create custom XMP 3.0 profiles.

The Kingston Fury Beast is also super easy to overclock. It also tends to have better stability during overclocking resulting in higher stable frequencies.

Latency or timings is another important measurement, that impacts the speed of RAM along with clock frequency. Latency is the delay between repetitive RAM operations. In newer DDR5 RAM, the average latency in entry-level affordable RAM is around CL40. Whereas in high-end performance-oriented RAM it is as low as CL36.

The Kingston Fury Beast on the other handle has improved stability during overclocking. It has a clock frequency of 6000MHz and a latency of CL40.

Corsair Vengeance is a low-profile RAM design. It is a great value for its price and should work with any motherboard due to its compact form factor. The Corsair Dominator Platinum RGB DDR5 RAM is covered in detail in our Best RAM for Ryzen 5 7600X article. It offers similar performance to the Corsair Vengeance RAM with the inclusion of RGB which can be controlled and synced with other RGB devices with the help of the iCUE software.

The Teamgroup T-Force Delta RGB DDR5 RAM is the best RAM for overclocking because of its On-die ECC and Power Management ICs. This is paired with its one-click overclocking technology and support for custom XMP 3.0 profiles.

The Teamgroup T-Force Delta is a high-end DDR5 RAM with the ability to overclock to up to 6400MHz in one click. This is possible because the ECC is built right onto the die. This helps in maintaining system stability even during overclocking too high clock frequencies.

In addition to On-die ECC, it also has a Power Management IC with helps in efficient power supply along with an advanced PMIC cooling system helping it stay at a relatively lower temperature.

It also includes an advanced super-efficient cooling system. It runs at 6400MHz with a latency of CL40 at 1.35V. A more detailed comparison of the Teamgroup T-Force Delta RGB DDR5 RAM with the G.Skill Trident Z5 RGB Series DDR5 RAM is on our Best RAM for Ryzen 9 7950X article.

Latency which is also known as Memory timings is another parameter that determines the speed of a RAM stick. Lower the Latency, Faster the DDR5 RAM stick since the lag between repetitive operations determines latency.

The Corsair Dominator Platinum has a latency of CL36 along with good overclocking thanks to the iCUE software. These together improve the speed drastically and overall performance well in the real world.

There are many entry-level budget-friendly DDR5 RAM kits on the market. But we recommend the Crucial 4800MHz DDR5 RAM because it is made of the same Micron die used in other high-end performance-oriented RAM kits.

The Crucial 4800MHz DDR5 RAM runs at a clock frequency of 4800MHz at 1.1V with a latency of CL40. It comes with onboard power management which should be able to handle overclocking.

It comes in a compact low profile design. There are no outer coverings. The PCB is exposed and the PC case airflow is the only way to cool it. Overall it has good performance for an affordable RAM kit. A detailed comparison of the Crucial 4800MHz DDR5 RAM can be found in our Best RAM for Intel 12600K article.

The Ryzen 7 7700X is a high-performance processor equipped with 8-cores and 16-threads. It will be a popular pick among gamers because of its high boost clock frequency of 5.4GHz. These gaming rigs require high-performance RAM to handle live streaming simultaneously with gaming.

We recommend the G.Skill Trident Z5 RGB Series DDR5 RAM as the Best High-performance RAM for Ryzen 7 7700X. It’s the best performing RAM in our detailed comparison. Where we compared the best RAM available to pick a clear winner which is on our Best RAM for Ryzen 9 7950X article.

There is another version of the G.Skill Trident Z5 RGB Series DDR5 RAM with a clock speed of 6400MHz at 1.40 MHz with a latency of CL32. This is by far the best high-performance RAM available.